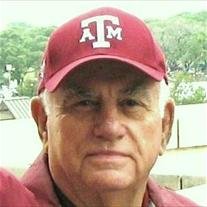 Walter Louis Jackson Walter Louis Jackson was born on September 27, 1930, in Corsicana, Texas to William Walter Jackson and Mary Cordelia Swanson Jackson. Aside from his college years, he lived his entire life in Malakoff, Texas. In 1950 he married Mary Louise Burks, also of Malakoff. Following his graduation from Texas A&M in 1952, the couple returned to Malakoff, purchased ranchland and began raising cattle. In addition to his lifelong ranching career, Walter worked at various other jobs over the years, including stints with Texas Power & Light, Gifford-Hill, and Nipak, and served as Henderson County Pct. 1 Commissioner. He also worked as a building inspector and co-owned a building supply company for a number of years. Walter served on numerous boards in Henderson County over the years, was a past member of Malakoff School Board, Lions Club, and the Malakoff Volunteer Fire Department, and coached youth sports. In 2015, Walter was named Agriculturist of the Year by the Athens Chamber of Commerce. Walter was a Christian and a Baptist. He served as a Deacon, treasurer, sang in the choir and in a men's quartet, and served on the church building committee. He was instrumental in implementing the media program at Malakoff First Baptist Church and continued this work at Athens First Baptist, broadcasting church services for the television ministry. As anyone who knew him was aware, Walter continued to be a passionate and devoted Aggie over the years. He was a member of the 12th Man Foundation and the Century Club at A&M and greatly enjoyed attending their home football games, missing only three in 32 years. Walter is preceded in death by his parents and by his wife of 63 years. He is survived by four children: Janice Cason of Malakoff; Walter Jackson, Jr. & wife Nancy of Malakoff; Joan Wilson & husband Dana of Arlington, TX; James Jackson & wife Christi of Malakoff; seven grandchildren: Alan Cason & wife Crystal of Whitehouse, TX; Derek Jackson of Woodville, TX; Lauren Wilson and Ryan Wilson of Arlington, TX; Haley Jackson and Wesley Jackson of Malakoff; Lindsey Perkins & husband Christopher of Jacksonville, Florida; and five great-grandchildren: Bryce Cason and Alex Cason of Whitehouse; Brady Jackson and Toby Jackson of Scurry, TX and Harper Jackson of Malakoff. Service will be held at the First Baptist Church of Athens at 2 P.M. on Monday, June 6, 2016. Pallbearers will be Jimmy Blakeney, Joe Hall, Robert Hoover, Charles McCleary, Robert Mills, and Jerry Stone.