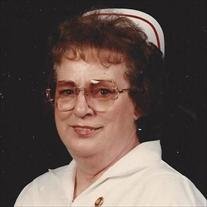 Marion Ruth Cates of Colfax, TX passed away in Mabank, TX on January 23, 2016 at the age of 90. Marion was born on January 07, 1926 in Jersey City, New Jersey to Harry Hoyt Wilson and Alice Quinn Wilson. Marion was the Director of Nursing in Van at Country Inn Nursing Home and was a member of the Eastern Star in Ben Wheeler. She is survived by her son, B E Cheatham, daughters, Alice Hayes and Susie Armstrong, 8 grandchildren, 23 great grandchildren, 2 great-great grandchildren. She was preceded in death by her parents, Harry and Alice Wilson, husband, H G Cates, sons, David and John Robinson, great granddaughter, Mary Quinn and 12 siblings. Memorial service will be held on January 30, 2016 at 2:00 PM at Colfax Baptist Church on FM 16 in Ben Wheeler, TX. Clergy: Mark Carter