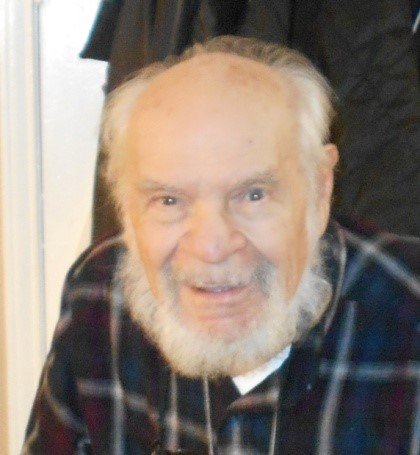 Deacon Louis S Hoffman
Born inÂ  N.J. to MartinÂ and Rose Hoffman Lou spent his childhood in NJ.
As one of the greatest generation, he enlisted in the Army Air Corp in 1944.Â Â  Lou's WWII service was with the 15th Air Force, 451st Bomb Group , 724th Squadron, 15th crew. His positions were that of radio operator, navigator, top and side gunner. He married Shirley B Sawyer in 1947. In their 66 years of marriage they traveled and lived all over the US and Europe. He flew in the Berlin airlift, flew with air/sea rescue out of Newfound Land, and finished his career in radar and missiles. Â After serving 26 years in the Air Force, Lou was retired honorably in California at the rank of Senior Master Sergeant. He then embarked on a new career of over 20 years with Varian in wave guide technology.
Â Lou was 4th Order in the Knights of Columbus. Â Fulfilling a lifelong dream,Â  Lou was ordained a Permanent Deacon in the Diocese of San Francisco in 1979. He transferred to the Diocese of San Jose when it was established. He was a Deacon at St. Julies in San Jose California and Our Lady of the Lake Big Lake Alaska. He led an exemplary life of helping others. He was involved in youth groups and established church teen groups, such as JOY (Jesus Over You), he was involved in prison ministry, and the Head Start program.
Â After retiring from Varian, Lou joined several of his children in Alaska where along with his wife enjoyed the wilderness, fishing and family. Then per doctor's suggestion moved to a warmer climate, so ventured to Texas to join other children and their families. Â
Lou is predeceased by 7 sibling, his wife Shirley of 66 years in 2013, his son Ronald in 2007, daughters in-law Margaret and Kathy, grandson Glenn, granddaughter Daniella.Â  Â Survived by 8 children and their spouses, Marty (Patty), Dan (Karen), Susan (John), Kathy (Stan), Cheryl (Jeff), Pete, Mike (Michelle), Art (Irene). Lou is also survived by numerous grandchildren, great grandchildren, nieces and nephews.
He led a life devoted to God, the Catholic Church, country, and family. Lou left a legacy of love and will be missed by his family and all those lives he touched.
A Mass celebrating the life of Lou will be at St. Catherine's, Carrollton, Texas on Tuesday 1/29/19.
Interment at Dallas Fort Worth National Cemetery at 1:15 1/29/19.
Some day after mastering the winds, the waves, the tides, and gravity, we shall harness for God the energies of Love. And then for the second time in the history of the world man will have discovered FIRE...... Â de Chardin
Ceiling And Visibility Unlimited,
We have the watch