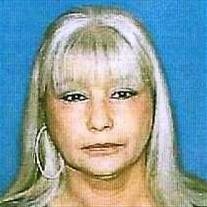 Judy Carol Gillaspy of Tool, TX passed away on March 16, 2016 at the age of 66. Judy was born on November 27, 1949 in Dallas, TX to Buster Brown Bosarge and Verla Dickinson Bosarge. She is survived by one daughter, Porsha Shafer and husband Allen Cole. Step-son John Gillaspy. Aunt Bobbie Dickinson Himes. Numerous cousins, family and friends. She was preceded in death by her parents Buster and Verla Bosarge, husband, Alton Ray Gillaspy, brothers, Buster Wayne Bosarge and Walter Sidney Bosarge. Visitation will be held on Tuesday, March 22, 2016 from 6 to 8 PM at Huckabee-Tomlinson Funeral Home in Seven Points, TX Service will be held on Wednesday, March 23, 2016 at 1:00 PM at Huckabee-Tomlinson Funeral Home in Seven Points, TX