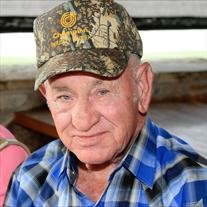 Johnny Ray Stanley of Trinidad, TX passed away on January 12, 2016 at the age of 78. Johnny was born on May 16 1937 in Dallas, TX to John Stanley and Norma Shaw Stanley. He proudly served in the U.S. Army from 1954-1958. Johnny is survived by his wife Linda Stanley, daughter, Tina and husband James White, son, Rocky and wife Donna Stanley, sisters, Reba Thorn and Loreta Stubblefield, grandchildren, Chad White, Shane White and Stoney Stanley, great grandchildren, Cougar White and Riggins White. He was preceded in death by his parents, John and Norma Stanley, and his brother Jackie Stanley. There will be a memorial service Sunday, January 24 at Parkview Baptist Church, 602 N Smith St. Malakoff, TX 75148. Lunch will be served at 12:30, and service will begin at 2:00.
To order memorial trees or send flowers to the family in memory of Johnny Ray Stanley, please visit our flower store.