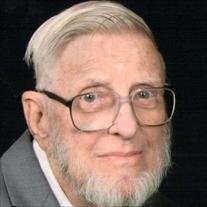 Jimmy Leslie Steele was born on July 17, 1935 in Brownsville, Texas. His parents were Guy Leland Steele and Lora Christelle Morgan Steele. He attended the University of Texas in Austin and received his Bachelor's degree. He attended Stephen F. Austin University and received his Master's degree. He attended Perkins School of Theology at SMU to become an Associate Member of the Methodist Church. Jimmy was a Methodist minister for 23 years both part-time in Center, Texas and later full-time in Trinidad, Texas. He was a CPA for 43 years in Brownsville, Texas and Center, Texas. He also had a small cattle operation and taught at the local junior college in Center, Texas. He was a member of Lions Club International and was a life-time member with over 50 years of service, serving in almost all offices including District Governor of Texas District 2-A3. He was a charter member of The Gateway Texas Chapter#49 Sons of the Republic in Shelby County, Texas and a Charter member of The James George Chapter #59 of the Sons of the Republic of Texas in Athens, Texas. He was a descendent of the Battle of San Jacinto, being the gr-gr-grandson of the last surviving member of that battle. He is preceded in death by his parents, Guy and Christelle Steele, his brother, Donald Steele and his brother-in-law Calvin Schaefer. He is survived by his wife, Toni Steele, sons, Anthony Steele and wife Becky of Kerens, Texas, Andrew Steele and wife Tricia of Rowlett, Texas, grandchildren, Jack, Jenna, Jason and Jessie of Rowlett, Texas, sister, Dolores Schaefer of Silsbee, Texas, sister-in-law, Doris Steele of Trinity, Alabama, sister-in-law, Bobbie Wheeler of Kaufman, Texas, brother-in-law Mike Carter and wife Donnie of Hillsboro, Tennessee, a large number of nephews and nieces. Visitation will be held on Tuesday, November 15, 2016 from 6 to 8 PM at Huckabee-Tomlinson Funeral Home in Malakoff, Texas. Service will be held on Wednesday, November 16, 2016 at 2:00 PM at First United Methodist Church located at 225 Lovers Lane in Athens, Texas. Clergies: Rev: Farrah Bentley and Rev: Faulk Landrum Interment will follow at Athens Cemetery in Athens, Texas.
In lieu of flowers donations can be made to the Lions Camp in Kerrville, TX, American Bible Association, or your home church.