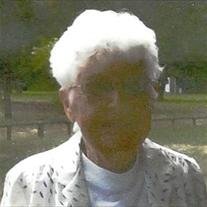 Jewell W. Humerickhouse, 95 years old of Whitehouse, TX, passed from the walks of this life into the arms of her heavenly Father on Wednesday, April 20, 2016 while residing at The Hospice of East Texas.
She was born in Bunyan, TX, the daughter of Charles Randolph Ward, Sr. and Maude French . She was a member of the Aley United Methodist Church.
She is survived by her nephew Verlon Ward of Luling, TX. The extended family consists of several step-children, numerous step-grandchildren and great-grandchildren and a host of nieces and nephews. A special note of gratitude to Jody Sharp and his family for their unfailing love and special attention to the care for Ms Jewell. She was preceded in death by her father Charles Randolph Ward, Sr., mother Maude French, first husband Verlon C. Walters and second husband Jack Humerickhouse, two brothers and one sister. Friends will be received Saturday, April 23, 2016, 1:00 pm at the at the Huckabee-Tomlinson Funeral Homes, Seven Points, Texas. Services will be held at Huckabee-Tomlinson Funeral Homes, Seven Points, TX, April 23, 2016 at 2:00 pm with Eston Williams officiating. Interment will follow in the Tool Cemetery, Tool, TX.
Condolences may be made online at tomlinsonfuneral.com