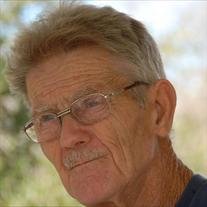 Jasper Steve Bennett quietly passed from the walks of this earthly life into the arms of his heavenly father on Tuesday morning, November 22, 2016 in Athens, TX at the age of 84. He was born in Dallas, TX to William Jasper Bennett and Mary Stewart Blaydes. He was a printer by trade and retired after 33 years from Reynolds and Reynolds. Mr. Bennett proudly served our country from 1947 to 1950 in the National Guard 49th Army Division. Jasper married Yvonne York Coursey of Dallas, TX on November 23, 1992. They would have celebrated their 24th wedding anniversary on November 23rd, 2016. Jasper and Yvonne relocated to Cedar Creek from Dallas July 1st, 1998. He was an active member of the Tulosa Baptist Church, Tulosa, TX until his health failed him. Survivors are wife Yvonne Bennett, sons David Michael Bennett of Lewisville, TX, William Steven (Bill) Bennett of The Colony, TX and Charles F. Bennett of Alabama and step-daughter Patricia Ann Taylor and husband Glenn of Midlothian, TX. Sister Virginia Berry of Colorado. Brother Frederick O. Bennett of Quinlin, TX. His legacy continues with 8 grandchildren, 3 great grandchildren and many nieces and nephews. He was preceded in death by his first wife of 40 years Joan A. Bennett; his parents William and Mary Bennett; four brothers William Joseph Bennett, Herbert Jones Bennett, Robert Bennett; andr Francis Bennett; and daughter Debra Ann Mc Cary. Graveside services will be held on Friday afternoon at 2pm at the Calvary Hill Cemetery in Dallas, TX under the direction of the Huckabee-Tomlinson Funeral Home, Seven Points, TX.