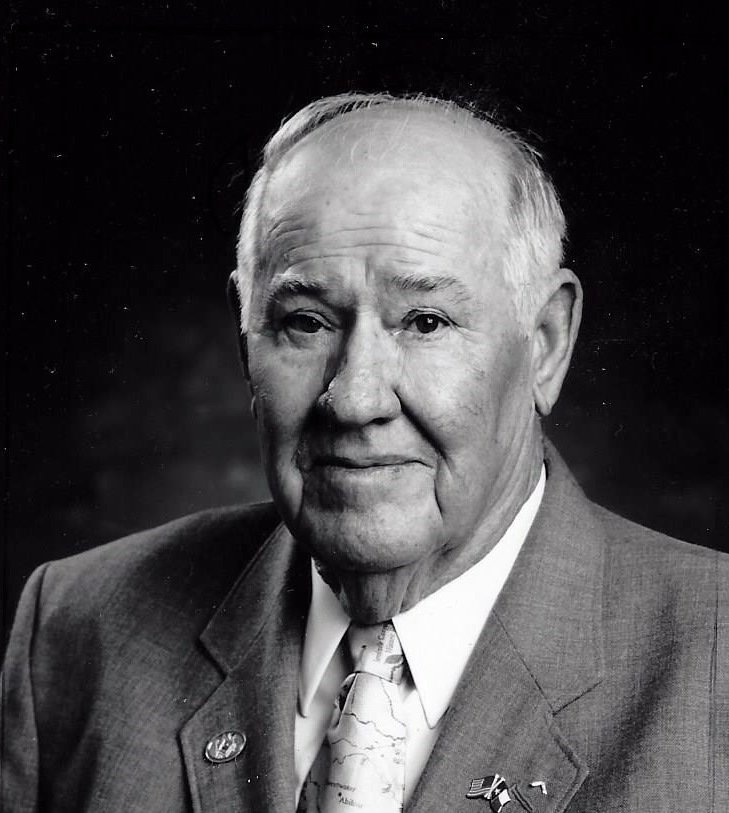 Â Born October 13th, 1927 on a family farm near Point, Texas in Rains County.Â  Died July 24th, 2017 in Dallas, Texas.Â  He was 89.Â  The 7th of 10 children born to Marshall Ernest Harris and Lucy May (Smith) Harris.Â  He graduated from Point High School in his U.S. Army uniform.Â  He served in the 302nd Reconnaissance Regiment of the 1st Cavalry Division in The Philippines, and in the Liberation & Occupation Army in Japan.Â  He served as a Military Policeman when the 302nd reverted to an MP Regiment in garrison duty.Â  He stood guard the night the convicted war criminal Hideki Tojo was hung and provided escort and security for General Douglas MacArthur, on many occasions.
On March 3rd, 1950, he married Anita Joyce Ludwick, of Dallas.Â  They were married for 62 years until her death in 2012.Â  They made their home in the Casa View neighborhood of Dallas and raised four children.Â Â  James worked for; Briggs Weaver Supply, the Ford Motor Company and Brinks Armored Transportation.Â  In 1985 he retired from both Ford & Brinks.
A lifelong Presbyterian he served as both Deacon and Ruling Elder of St. Mark's Presbyterian Church in Dallas.Â  He was also active in the White Rock Church Athletic Assn. coaching baseball, softball and (his passion) basketball.Â  He also served as a sponsor for the Bryan Adams High School Rodeo team for several years and President of the Circle L Riding Club in Garland, Texas, several times.
He is a Past Master, a 60 year and endowed member of James Ladd Burgess Masonic Lodge #1305, a member of Scyene Lodge #295, a member of The Dallas Scottish Rite Bodies and Hella Shrine in Rowlett.Â
He retired to the Styx Community in Northwest Henderson County and remained active raising cattle and baling hay for himself and the community until his death. He was an avid sports fan.
He is preceded in death by his wife Joyce and his oldest son James Craig Harris, three brothers and five sisters. He is survived by his daughters Joyce Ann Fugit and husband Lonnie of Houston, Donna Harris of Dallas and his son David Harris of Styx. He leaves as a legacy, two grandchildren whom he adored; Joyce Faith Fugit and husband John Sigren of Houston and Jeremiah Carlyle Fugit and fiancÃ©e Meghan McCaffrey of Washington D.C. and two great grandchildren James and Andrew Sigren. He is also survived by his brother Neil Alex Harris and his wife Lou of Point, His brother in law J.B. Dooley of Lone Oak, Texas, his sister in law Judy Beedle of Dallas, and numerous nieces and nephews, their spouses, children and grandchildren.
A celebration of his life will be held at Huckabee-Tomlinson Funeral Home in Seven Points, Texas on Saturday, July 29th, 2017 at 10am with Reverend Phillip Million of First Presbyterian Mabank, officiating. Interment to follow beside his wife & son in Kings Cemetery in Aley.Â  Visitation with family and friends on Friday evening, July 28th 6 till 8 at the funeral home.
Pallbearers:Â  Mike Sonnier, Robert Harris, Paul Harris, Steve Harris, Garry Harris, Brandon Dooley, Brendyn Zook, Dwayne Zook
A life well spent!
Â