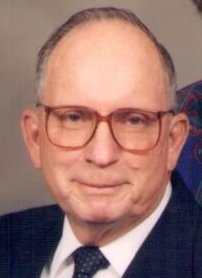 Billy Gene Self age 88 went home to be with his Lord and Savior on December 22, 2017.
Bill was born September 9, 1929 in Rule, TX to Thomas and Octa Lavert Self.Â  He was one of four children.Â  He graduated Rule High School and we on to graduate from North Texas State with a Bachelors in Chemistry.
While working at St. Regis Paper Company, he met whom he describes as the most important part of his life.Â  Jeanne Broyles was and employee at Regis and Bill was her boss.Â  They fell in love and were married on August 23, 1972.
Both shared an amazing love for the Lord and traveled spreading His word.Â  They were a big part of Volunteer Christian Builders.Â  Mr. Self was one of the leaders of the group as they traveled around the country helping to build churches.Â  He enjoyed gardening and woodworking.Â  He also loved being involved with the Malakoff Masonic Lodge #759.
Those who have preceded him in death are his parents Thomas and Octa Self, his loving wife Jeanne Self, son Michael Self, granddaughter Amber Ray Gentry, brothers Cecil Self, Lawton Self, and sister Ivalee.
Survivors include his sons Mitchell Self, Phillip Gentry, grandchildren Shannon Lane, Stephanie Self, Curtis Gentry, nephew David Self, niece Kathy and six great-grandchildren.
Visitation will be from 9-11 at the First Baptist Church, Malakoff, on December 26, 2017.Â  The service will be at 1:00 PM at the church on December 26 with Bro. Jody Jones and Bro. Casey Perry officiating.