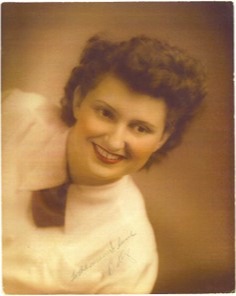 Betty Nell Felty Tutt was born August 2, 1931, to Isom Melvin "Hoot" Felty and Ray Marie Griffin. She was the second born of seven children: William James "Bud" Felty, Bennie Dee, twins Dixie Jean and Nadene, JoAnn, Shirley Ray, and Janet Claudine. She grew up outside of Wichita Falls, TX, in small town of Petrolia and went to school there.

She married at age 19 to Wayne Edward Tutt, August 26, 1950, in Dallas Co. TX. They moved to Houston where both her children were born and lived there until 1964. Wayne took a job in Chico, CA for a year, and then they moved back to the Dallas Love Field area by 1965.

They had two boys, Wayne Edward Tutt, Jr. and Jackie Jay Tutt. Betty was a homemaker and an excellent cook. She was the matriarch of the family. About the 1980's when she went to work for Lawrence Engineering (an airplane parts co. located just down the street), Denton Dr., Dallas, TX. She was awarded a trip to California for being a long-time loyal employee. After hey retired and moved out to Cedar Creek, TX she began working again with Mabank ISD.

In 2006, she moved to live with her son, Wayne Jr and family in Victoria, TX and moved with them to La Grange in 2009 as they retired on the family ranch. She lived with them until 2019.

Betty missed the Dallas area and her friends and returned to Irving to live with her youngest son, Jack. Her health took a turn for the worse and she was admitted to a nursing care facility shortly after arriving in Irving.

She was preceded in death by her parents; her sisters, Bennie, Dixie, Nadine, JoAnn, Shirley and brother William J Felty; her husband, Wayne Tutt and brother-in-law, Jay Tutt.

A graveside service for Betty will be Monday, November 21, 2022 at 1PM at Payne Springs Cemetery.

To order memorial trees or send flowers to the family in memory of Betty Nell Tutt, please visit our flower store.